Since early 2020, shippers have been experiencing capacity crunch scenarios resulting from container shortages, port congestion, and skyrocketing freight rates. And now the experts agree that 2022 will be another year of unreliable, very expensive international ocean transportation.

Before the pandemic, sending a container from Shanghai to Los Angeles cost around $2,000. By early 2021, the same journey cost as much as $25,000 per container. Ongoing pandemic and subsequent supply chain disruptions have only exacerbated these trends.

“Logistics players have struggled as every cog in the wheel started to wear out one after the other,” says Johannes Schlingmeier, Ph.D., co-founder and CEO of Container xChange, an online marketplace for container leasing. “They should expect the same this year.”

Meanwhile, while those in the supply chain struggle, steamship lines have benefited with enormous earnings and profits. Maersk, for one, is set to report net income of more than $17 billion for 2021, according to analyst estimates. 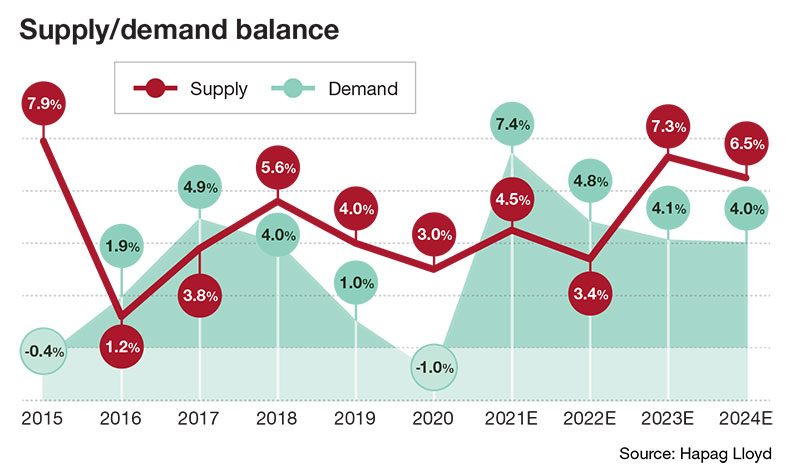 Analysts predict that a number of factors will continue to make an impact on ocean shipping in 2022. A big one is the fact that there’s a short supply of shipping services and containers at a time when the demand for the movement of goods is only rising.

“The balance in supply and demand is still violently tipped toward the shipping lines,” remarks Cullen. “Although overall demand growth is moderate, supply of capacity is still trailing demand and will continue to do so until the second quarter of 2022—at least—and probably until 2023.”

Changes in trade patterns also amplify this trend. Although China was badly affected by the pandemic at the onset, disruption has been ongoing across the region, including Vietnam where a large proportion of factories are only recently coming back on-line. “This has resulted in maldistribution of containers, which has led to congestion and consequently less capacity on the market as ships, trains, trucks, and containers queue up,” Cullen says.

Adding fuel to the fire, the supply/demand balance continues to be very narrow. “Shipping lines and others cannot have assets just sitting around doing nothing,” Cullen says. “They cannot have spare capacity in periods of normal demand. Demand has been deformed as the structure of trade has evolved.”

And with the outbreak of new variants and subsequent continued lockdowns expected in China, Schlingmeier predicts the supply chain will be further strained. Consequently, logistics companies are preparing for another year of disruptions. A recent global survey published by Container xChange found that 75% of the container logistics industry is rethinking its logistics strategy for 2022. “But with labor union conflicts at U.S. ports easing up, we’ll also see the capacity challenge improving,” he adds.

Although shipping conditions could return to “normal” as early as the second half of 2022, Schlingmeier sees container prices, surcharges and freight rates continuing to be high in 2022 due to the unrelentless demand and supply crunch. 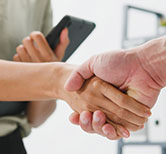 The 2021 logistics nightmare has forced shippers to react to problems and to try to divert shipments to alternative ports of entry, alternative transport modes (air freight, cross-border rail) and alternative providers (“premium rate” NVOs). Such moves, however, have left them with no time to pause and contingency plan.

Consequently, it’s now more important than ever for shippers to work with the right logistics providers and strengthen carrier relationships and business continuity plans. “This will help shippers deal with ‘the next crisis’ as and when it happens,” advises Philip Damas, managing director and head of supply chain advisors at Drewry.

This means reviewing your supply chain and transport networks to reduce exposure to the super-inflated container shipping costs that are expected to remain at least through the midterm.

“Many members of the Drewry Benchmarking Club are already looking at sourcing products from alternative
locations to avoid spending 5-digit freight rates per container from Asia to the West,” Damas reveals. “Others are looking at using warehouses closer to the port instead of using those located near congested rail hubs such as Chicago, for example.”

Based on recent and current consultancy work carried out for shipper customers, Drewry suggests that shippers optimize internal operations. This means improving minimum quantity commitments (MQC) management processes as well as volume forecasting and communication of forecasts to carriers, etc. In essence, control better what you can control. – Karen Thuermer

A big factor exacerbating this crunch is port congestion, particularly in the United States and Europe. The most recent annual joint study entitled ‘C-TIMING’ by Container xChange and applied research firm Frauhofer-CML reports that the containers are now moving in and out of China at record speeds, while port congestion in Europe and the U.S. continues to slow the return of boxes to Asia and stymie the recovery of global ocean supply chains.

“Once containers reach Asia, they’re being redeployed at record speeds,” says Schlingmeier. “However, the mismatch between supply and demand at many origin ports, including in China, means that it’s hard for U.S. and European importers to secure boxes unless they have planned ahead, or are working closely with their box supplier, forwarder or container line to ensure they have both a vessel slot and a container available in advance.” 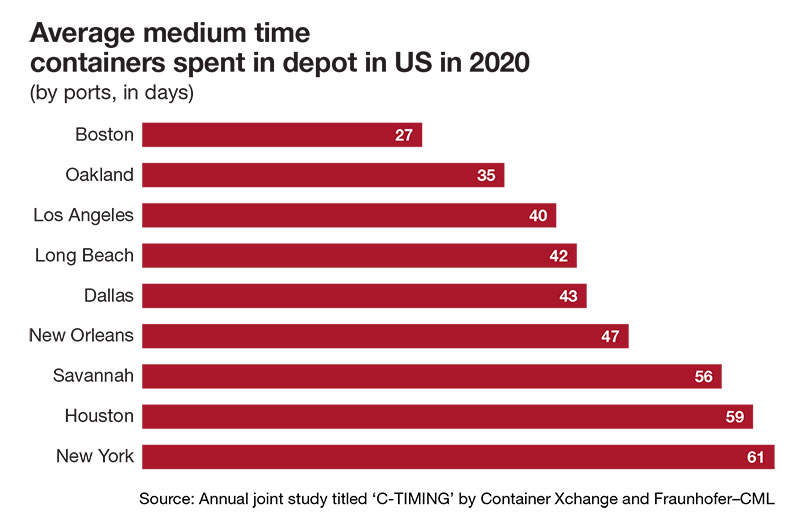 Philip Damas, managing director and head of supply chain advisors at Drewry in London, notes that disputes between the ILWU union and U.S. West Coast port employers during the second quarter of 2021 and possibly beyond has exacerbated acute congestion problems with ripple effects on global carriers’ schedules and on the ability of ports in Asia to handle unscheduled ships or ships arriving in bunches.

“For beneficial cargo owners [BCOs] with long memories of earlier disputes, now is the time to look at alternative routes to avoid U.S. West Coast ports,” Damas suggests. “We would suggest a contingency plan for ILWU-related U.S. West Coast port shutdowns to mitigate the next port crisis.”

Meanwhile, the new variant Omicron has shaken the industry once again. China, with its current zero tolerance COVID policy, is likely to shut down without warning, along with more secondary ports, more barge operations and more feeder operations as new cases arise.

“We fear the prospect of more dislocations and lack of coordinated asset deployment between ocean carriers and rail carriers in the United States,” notes Christian Roeloffs, co-founder and CEO, Container xChange. “Seafarer shortages and travel restrictions may worsen with any surge in cases, which will further limit the number of sailings shipping companies are able to make to meet demand.”

“While it was rarely the case until 2019, the ‘freight’ component of the total landed cost now makes a real difference for many types of products,” Damas says. “Today’s unreliable, very expensive international shipping challenges favors low-cost production in Asia.”

In surveying the container logistics industry, Container Xchange found that 75% of almost 800 respondents revealed that they are rethinking their logistics strategy. When asked what they are going to do differently, the most popular strategy was “more diverse sourcing” (71%) with 43% saying they will go for holding more inventory.

“Twenty-one percent said ‘entering into long-term contracts with carriers,’” reports Schlingmeier. The bottom line: importers are going to try to build as much control on their supply chain as possible.

“With the renewal cycle just ahead of us, we already see carriers trying to sign long-term contracts with BCOs,” adds Schlingmeier.

Another factor affecting ocean shipping is that shippers are now seeing flash points between the ocean carrier industry and the forwarder/NVO sector.

“We’re starting to see some ocean carriers withdrawing from NVOCC relationships and others, making it difficult for NVOs to offer carrier-like fixed contract rates to shippers under preferential ‘named account’ terms agreed in advance with the ocean carriers,” Damas notes.

Damas emphasizes how the role and the pricing strategy of the NVOCC have shifted since the start of the pandemic, with many now offering shorter-term and varying premium rate levels in return for finding space and equipment solutions. “Medium and small NVOs may find themselves excluded from BCOs’ large annual ocean tenders,” he warns.

Damas also cautions against difficulties dealing with minimum quantity commitments (MQCs) and widespread disputes about MQCs. “More BCOs, even the largest ones, will have to accept the new reality of the market,” he says. In other words, you cannot expect to ship 10 containers one week, 50 containers the next week, and hope to get 100% capacity for both weekly volumes.

“Carriers and NVOs are already telling BCOs that their capacity in 2022 will be the contractual MQC per annum ‘divided by 52’,” Damas says.

“Logistics players have struggled as every cog in
the wheel started to wear out one after the other…
They should expect the same this year.”

Consequently, in 2022 shippers can expect carriers and NVOs to require full or high payment for freight when capacity is not used. Damas believes that the majority of BCOs are not organized to manage this type of volume commitment. “Disputes will spread in 2022 about how to deal with excess volume above weekly MQC and deficit volume below weekly MQC and about associated penalty clauses,” Damas adds.

The detailed management of contractual MQCs is a new issue to many shippers, but it can be addressed. Drewry has been working with BCOs, particularly U.S. importers, on how to build plans to move closer to the objective of even volumes or at least early communication of weekly volumes. Techniques to improve in this area include more aligned operations of consolidation and “origin management” in Asia with suppliers.