And looking ahead in 2022, experts estimate that the pressure on global supply chains will continue—and the light at the end of the tunnel is not to be expected until the second half of the year at the earliest.

Above all, the consensus is that the pressure on the ocean freight market will continue in 2022, and freight rates are unlikely to fall back to pre-COVID levels. Capacity problems and congestion in the ports will continue to combine with strong global demand in the consumer goods sector.

German economist Monika Schnitzer expects that the current Omicron variant will have further impact on global shipping times in the coming months. “This could exacerbate the already existing delivery bottlenecks,” she warns. “Shipping times from China to the United States have already increased from 85 days to 100 days due to the Delta variant, and that could increase again. Europe is also affected by these problems, as the situation remains tense.”

In the meantime, the ongoing pandemic has prompted logjams at leading ports on the U.S. West Coast and in China, meaning that hundreds of container vessels are waiting at sea for a berth. At the beginning of this year, Maersk warned its customers that the waiting time for container vessels to discharge or pick up cargoes at the Port of Long Beach near Los Angeles is between 38 days and 45 days, and that it’s expected that the constraints will continue. 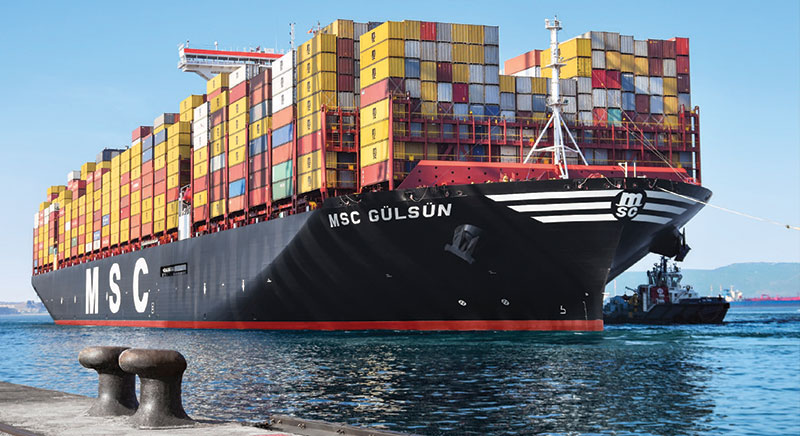 Looking to China, fears are growing that recent Omicron breakouts will lead to further port shutdowns. As reported by the state broadcaster CCTV in January, the port of Tianjin was locked down after the local outbreak of Omicron—less than a month before the start of the winter Olympics in nearby Beijing. Chinese authorities temporarily locked down the ports of Yantian and Ningbo last year.

The restrictions resulted in delays for truck drivers moving loaded and empty containers between factories and the port, and the interruptions in production and transportation caused delays in exporting and returning empty containers to factories overseas.

In Europe’s largest seaport, the Port of Rotterdam, congestion is seen as persisting through 2022 as well. Although vessels are not currently waiting outside Rotterdam, storage capacities are limited and the European hinterland connections are not running smoothly. 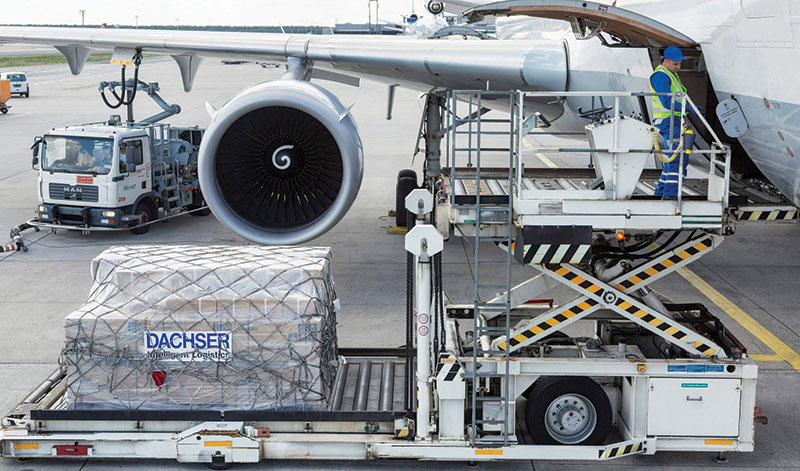 Dachser provides additional capacity with its own airfreight network linking the U.S., Europe and Asia. Photo courtesy of Dachser

“In 2022 we expect the extreme congestion at the Rotterdam container terminals to continue for the time being,” says Emile Hoogsteden, commercial director at the Port of Rotterdam Authority. “This is because the international container ship fleet and terminal capacity are not growing at a rate commensurate with demand.” Nevertheless, in December, the port announced that its transshipment volume surpassed 15 million twenty-foot equivalent unit (TEU) containers for the first time.

“In the Port of Hamburg operations are running normally at its multi-purpose and bulk cargo terminals and the container terminal operators are offering 24/7 service,” says Axel Mattern, CEO of Port of Hamburg Marketing. “The port’s main players are making great efforts to eliminate bottlenecks and delays as rapidly as possible.”

Late ship arrivals, which the Port of Hamburg can’t influence, are causing export containers to pile up in the port’s terminals at times. The terminals, forwarders and shipping companies involved are aware of their responsibility for smooth operations and are working within the bounds of the possible on solutions.

While shippers were under pressure, 2021 was a prosperous year for container carriers. According to a forecast by the shipping intelligence provider Alphaliner, the 10 leading publicly listed container shipping lines are on track to earn a record $115 billion to $120 billion profit in 2021. This is a windfall that could transform the structure of the industry as those earnings are reinvested, stated Alphaliner analysts last month.

The sector has also benefited from the fast recovery of production in Asia and strong demand in Europe and the United States. Ocean freight rates nearly doubled last year due to shortages in container capacity, and early forecasts indicate that the rates are likely to reach much higher levels in 2022.

Data analysts at Xeneta are reporting that the first contracts for 2022 are reflecting record-high levels ahead. “When will it end?” asks Xeneta’s CEO Patrik Berglund. “Shippers hoping for some much-needed rate relief have been left punch-drunk by another round of hefty blows to bottom-line costs. The continued perfect storm of high demand, maxed-out capacity, port congestion, changing consumer habits, and general supply chain disruption is fueling a rates explosion that, quite frankly, we’ve never seen the likes of.”

There was also a change at the top of the world’s leading container carrier ranking. In its January global ocean fleet statistics, Alphaliner reported that Mediterranean Shipping Company (MSC) has surpassed Maersk as the world’s biggest container line.

In a statement issued last year, Skou said that “our goal isn’t to be No. 1. Our goal is to do a good job for our customers, delivering strong returns, and not the least to be a decent company for all other stakeholders doing business with Maersk.” He also mentioned that the company is strongly focusing on expanding its logistics capabilities, where profit margins are bigger.

Pursuing that goal, in December Maersk announced the acquisition of Hong Kong-based LF Logistics to expand its coverage and logistics capabilities in the Asia Pacific region. The $3.6 billion, all cash deal was one of the largest takeovers in the company’s history. 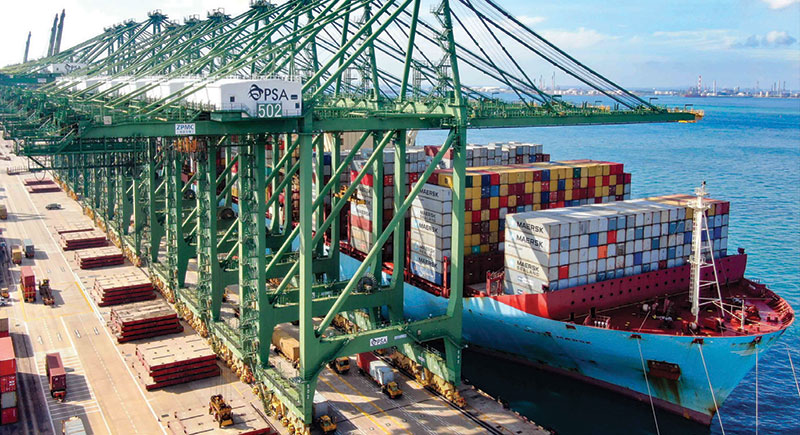 And there was another big deal announced this month by Singapore-baed PSA International Pte Ltd (PSA). The port group has signed an agreement to acquire 100% of the shares of privately held BDP International, Inc. (BDP) from the New York-based private equity firm Greenbriar Equity Group, L.P. (Greenbriar). BDP, based in Philadelphia, is a provider of global integrated supply chain, transportation and logistics solutions. With 133 offices worldwide, it specializes in the management of highly complex supply chains and high care logistics and innovative visibility solutions.

According to Tan Chong Meng, group CEO of PSA International, “BDP will be PSA’s first major acquisition of this nature—a global integrated supply chain and transportation solutions provider with end-to-end logistics capabilities. Its strengths will complement and extend PSA’s capabilities to provide agile, resilient and innovative cargo solutions. Customers will be able to benefit from the extensive capabilities of both BDP and PSA, while accelerating their shift toward sustainable supply chains.” The transaction is subject to formal approval by the relevant authorities and other customary closing conditions.

New giant on the horizon

According to the news agency Reuters and the Chinese state-owned broadcaster CCTV, the new company, with a charter capital of about $4.7 billion, is a merger of the five state-owned companies, including China Railway Materials; China National Materials Storage and Transportation Group; Huamao International Freight Limited Company Shenzhen Branch; China Logistics; and China National Packaging Corporation.

The State Asset Supervision and Administration Commission (SASAC) and state investment company China Chengtong each own 38.9%. Strategic investors include China Eastern Airlines, COSCO Shipping, and China Merchants Group, which will respectively hold shares of 10%, 7.3%, and 4.9%.

It currently owns 120 specialized railway lines, with routes connecting Asia and Europe, and it also has 42 warehouses and other storage facilities covering 4.95-million square meters as well as a transportation network that currently covers 30 Chinese provinces and has a presence in five continents, according to CCTV.

With the new logistics group, China will strengthen its cross-border logistics business and intermodal transportation services. The move also reflects that China is going to compete with the existing global logistics players—who will most certainly be keeping a close eye on the development.

In response to ongoing demand for increased transport capacity, international freight forwarders have launched new services between Europe, the United States and Asia.

In 2021, after the French logistics provider GEODIS chartered its first vessel to alleviate container capacity shortage on its Asia-Europe routes, the company has launched its own-leased A330-300 full freighter aircraft under its brand name to upgrade its AirDirect services between Europe, the United States and Asia. Operating between Amsterdam, London, Chicago and Hong Kong, the aircraft also serves the China-Europe route for the peak season.

“With the continued strain on airfreight capacity, we wish to ensure a more sustainable supply of air cargo space for our clients and are therefore investing in this, our own, first dedicated freighter,” says Marie-Christine Lombard, GEODIS’s CEO.

That the provision of self-controlled airfreight services with own-leased aircraft pays off has been also been proven by DACHSER USA, a subsidiary of the global logistics provider Dachser. Since starting its weekly trans-Atlantic freight service between Frankfurt and Chicago in 2020, it has grown with more than 85% of its U.S. customers utilizing this service between Europe and the United States more than once.

“It has proven to be such a dependable, efficient solution that this route has become a cornerstone in our global air freight services network,” says Andy Frommenwiler, vice president, air freight, USA at DACHSER

Supply chain disruptions and capacity constraints affected demand, despite economic conditions remaining favorable for the sector. Because the impact of COVID-19 distorts comparisons between monthly results in 2021 and 2020, comparisons were made to November 2019, which followed a normal demand pattern.

Although economic conditions continue to support air cargo growth, supply chain disruptions are slowing growth due to labor shortages, partly due to employees being in quarantine, insufficient storage space at some airports and processing backlogs exacerbated by the year-end rush.

Several key airports, including New York’s JFK, Los Angeles and Amsterdam Schiphol reported congestion. However, retail sales in the United States and China remain strong. In the U.S., retail sales were 23.5% above November 2019 levels, and in China, online sales for Singles’ Day were 60.8% above their 2019 levels.

In the North American region, air cargo growth continues to be driven by strong demand. Carriers there posted an 11.4% increase in international cargo volumes in November 2021 compared to November 2019. This was significantly below October’s performance (20.3%). Supply chain congestion at several key U.S. cargo hubs has affected growth. International capacity was down 0.1% from November 2019.

European carriers saw a 0.3% increase in international cargo volumes in November 2021 compared to the same month in 2019, but this was a significant drop from October 2021 (7.1%). European carriers have been affected by supply chain congestion and localized capacity constraints. International capacity was down 9.9% in November 2021 compared to pre-crisis levels, and capacity on the key Europe-Asia route was down 7.3% during the same period.

Asia-Pacific airlines saw their international air cargo volumes increase 5.2% in November 2021 over the same month in 2019—this was only slightly below the previous month’s 5.9% expansion. International capacity in the region eased slightly in November, down 9.5% compared to 2019.

Lots of work to do

It’s clear that the pandemic has exposed the vulnerability of global supply chains—a problem the logistics industry will continue to face this year. A high degree of flexibility and close cooperation between all parties in the supply chain is required to be well prepared to respond to the crisis and, hopefully, to a post-COVID era.

Investments in transport infrastructure, such as those being made on a large scale in the United States, are helping to make ports and airports more efficient, while digitalization and automation are important to optimize logistics processes further.

Not to be forgotten, however, is the human factor. The shortage of labor—not only among truck drivers—shows that efforts are still needed to maintain logistics supply chains. Restructuring supply chains to make them sustainable is yet another challenge.

There remains much work to do for the logistics sector, which has certainly proven its ability to provide flexible and creative solutions.